Title: Strike Me Down
Author: Mindy Mejia
Date finished: 5/15/20
Genre: Thriller/suspense
Publisher: Atria/Emily Bestler Books
Publication Date: April 7, 2020
Pages in book: 348
Stand alone or series: Stand alone
Where I got the book from: NetGalley / Publisher
NOTE: I received this book for free from NetGalley / Publisher in exchange for an honest review. This in no way affected my opinion of the book, or the content of my review.

From the critically acclaimed author of Leave No Trace, the “nail-biting page-turner that grabs you early and never lets go” (The Real Book Spy), comes a visceral thriller where a high stakes crime triggers a woman’s complicated and potentially deadly search for the truth.

Nora Trier catches thieves. As a forensic accountant and partner in her downtown Minneapolis firm, she’s unearthed millions in every corner of the world. She prides herself on her independence, the most essential currency of accounting, until her firm is hired by Strike.

An anti-corporate, feminist athletic empire, Strike is owned by Logan Russo, a brash and legendary kickboxer, and her marketing genius husband, Gregg Abbott. They’re about to host a major kickboxing tournament with twenty million dollars in prize money, and the chance for the champion to become the new face of the company. Gregg suspects his wife already has a new face in mind—a young trainer named Aaden, for whom Logan feels an unexpected connection.

Days before the tournament begins, it’s discovered that the prize money is missing. Gregg hires Nora’s firm to find both the thief and the money but Nora has a secret connection to Strike that threatens her independence. Her partner pressures her into taking the case anyway, hinting he has information about Strike that could change the course of the investigation in a shocking and deadly way. 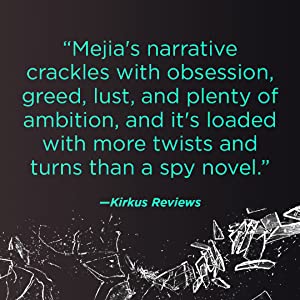 My review: I was provided a free copy of this book in exchange for an honest and fair review. I read this as part of Bout of Books 28.

I have read other books by this author in the past and have always enjoyed them. And I have to say – this book was pretty perfect for me since it’s about a CPA! And there are a couple funny anecdotes included that made me giggle (included below).  This was a solid mystery, it had me guessing pretty much right up to the end. I thought there was going to be more of a “reveal” so there was a small disappointment when the plot twist wasn’t quite as twisty as I’d expected. Overall though the whole plot was good and I thought it was well paced, I was interested throughout the book. I didn’t understand the vagueness on why her team was crying about Corbett, and it said they knew something she didn’t, but I can’t remember if we ever found out what that thing is. Also the ending was a little too vague for me. Was there something romantic going on between Nora and Logan? It was a little unclear to me and left it up a little to the reader but I wouldn’t liked it to be a little more definitive. Other than those couple things though it was a really good book and I really enjoyed it. Especially being an accountant myself (and being the dorky kind where I actually like accounting) it was exciting to see an accountant as the main character and topic of the story! And I didn’t even realize that the author is a CPA herself, how fun. I would definitely recommend!!

FUN Quotes from the book

“Among accountants, there was no judgment like spreadsheet judgment.” (This is 100% true)

(This is a long one but so funny) “A business owner was looking to hire a manager and he interviewed each candidate with a simple question: ‘How much is 2+2?’ The engineer pulled out his slide rule and shuffled it back and forth, finally announcing, ‘It lies between 3.98 and 4.02.’ The mathematician said, ‘In two hours I can demonstrate it equals 4 with the following short proof.’ The psychologist said, ‘It’s not for me to answer, but we should spend some time exploring the question.’ The attorney stated, ‘In the case of Swenson v. the State, 2+2 was declared to be 4.’ The accountant looked at the business owner, got out of his chair, and closed the office door. Then he leaned across the desk and said in a low voice, ‘How much would you like it to be?'”

Hi my name is Rebecca Lyman and reading is my passion. This blog will document my journey through reading over the years!