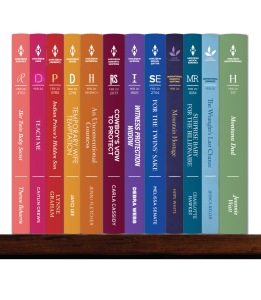 Harlequin is featuring their category romance in an August 2020 series blog tour! Incognito Ex will be released August 1, and to celebrate I am participating in a Blog Tour for the book! I recently read this novel and while the plot didn’t appeal to me personally there was a lot to like about this novel and it is still a great example of a Harlequin series novel! See below for more information about the book, a short author bio, and an excerpt:

When she is targeted by a vicious mobster, a past love is her only hope.

When a Russian gangster targets Coral Staufer, she is desperate for help. Coral stumbles across an undercover agent none other than the man she loved and lost, Trevor Stone. Trevor will risk anything to stop her from becoming a mob casualty…even risk his career to protect Coral. But when their past love reignites, their entire mission—and very lives—are at stake.

Geri Krotow is a Naval Academy graduate and Navy veteran. She has traveled to and lived in many places abroad, including South America, Italy and Russia. Her family has finally settled down in Central Pennsylvannia but Geri still writes about all the places she’s been. An award–winning author, Geri writes the Silver Valley PD for Harlequin Romantic Suspense

Trevor Stone never took his eye off the ball while undercover. Never. But as he fought to keep these thugs from harming Coral while processing the fact that he still had to get her out of here, he was distracted. The last several days, working alongside ROC gang members, he’d felt her nearby, as if the invisible thread that connected them had come alive again.

He’d known she lived here, knew this was the farm she’d inherited. He knew what one rogue ROC member had done to the barn last January and hadn’t been able to fight his protective instincts toward his ex, years after they split. He’d volunteered for the mission, stupidly thinking that he’d be able to ensure her safety while not coming into direct contact with her.

What he could never have predicted was how he’d react when face-to-face with Coral again.

His hands clenched painfully tight, and all he wanted was to throw Coral over his shoulder and run for the Appalachian Mountains that surrounded Silver Valley. Take her far from this night, to a place where ROC couldn’t touch her. And yes, away from seeing him again, especially like this.

The raw fact that she was about to be assassinated by one of the two lower-level ROC crooks was all that kept him focused. The complication that she’d just blown his cover, carefully cultivated over the past two years, was a sideshow. One he’d have to address, but later, after he got her out of here alive. When he was far from her, and knew she was safe.

“What did she call you? Who is Trevor?” Disbelief, suspicion, anger snaked across the ground as the two other men cried out, and he figured he had about two seconds to act.

“Stupid girl took a hit to her head.” He spoke as Grisha, the undercover identity he’d adopted to help the Trail Hikers, the secret government agency that he worked for, and his sole focus was to break up the ROC’s hold on the East Coast.

“I’m not a girl, and my head isn’t that messed up. It is you, isn’t it?” At least she’d lowered her voice. It wouldn’t be a surprise to her to know he was still doing undercover work. How could she forget? It had been the death knell of their marriage.

Coral’s initial appearance of frailty after the conk on her head had morphed into righteous anger. He didn’t blame her, but he couldn’t keep looking at her. Three long years without one glance at her, without her eyes on him, without the sound of her voice, threatened to destroy any focus he had left.

He gave himself a quick mental shake. If she didn’t get them killed with her words, he was going to blow it with his inability to block out the distraction that was Coral.

“We have to get out of here.” He addressed the other two men, both young and not the brightest, working for Ivanov, the ROC head honcho. “The cops are com-ing. You two take off. I’ll meet up later. I’ll take care of her, trust me.” He nodded at the road, and the two men craned their necks to verify his claim. The sirens screamed in the night, and he saw the flashing lights move down the highway in the distance. He took the opportunity to lift Coral from her bent position and pulled her up against him, his arm raised as if he was going to strike her.

“Don’t talk. Follow my lead. And don’t say my name again.” He murmured into her ear, his lips against her skin out of necessity. He couldn’t risk the others hearing him. “Now yell when I move my arm, like I’ve hit you.”

Coral’s strangled gasp nearly threw him out of his reality as an undercover agent posing as a working ROC stiff. Her voice tried to drag his mind back to hazy, hot California days when they’d spent all day in bed, getting up only to eat. It wasn’t fair that a single sound from her still did this to him. That the sur-real connection they shared hadn’t perished with their marriage.

“Kill her now, Grish.” Adam was pissed, in pain from the gunshot wound, and wanted Trevor to prove he wasn’t Trevor, that Coral really was suffering from a severe head trauma. ROC agents weren’t high on trust, and Trevor, as Grisha, was new to their local group.

“It’d be stupid to do it here. She’s easier to move while she can still walk. Let me take care of her, then I’ll come back for you both. Stay low, don’t use your flashlights. The police will stop at the farmhouse first. We’ve got time.” He wrapped his arm around Coral’s waist—she was thinner, but still steely strong—and half dragged, half ran with her to where he’d seen her car earlier in the day, when he’d made his own excursion out here.

Self-recrimination threatened to stop him in his tracks as he knew he should have made doubly sure she wouldn’t be on the property when ROC came looking for Markova’s treasure. But he’d run out of time to verify his source who’d told him she’d be out tonight. Even with her being here, he’d never have expected she’d catch them—usually his ROC associates were somewhat competent. Unlike these two.

When they were what he estimated was halfway to her car, he pulled out his pistol and held her tight with his other arm. “Hang on. I’m going to shoot at the ground, to let them think it’s you.” He quickly fired two shots at the dirt, making sure the bullets had nothing to bounce off, making it sound like he’d just eliminated a witness.

The sirens were close, and he saw the patrols turn into the long drive leading to the barn area.

“What are you doing here, Trevor?” Her voice shook, but he couldn’t tell if it was shock or anger. Probably both.

“I’ll explain later. Right now we can’t be seen by anyone.”

“But that’s the police—I called them.”

“I can’t be spotted, and for now you’re with me.” He had no way of knowing which officers were re-porting, and he couldn’t risk being taken into custody. Only two SVPD officers were cut in on his deep undercover work.

Now the woman on his arm was one more added to the list of people in the know. The woman he’d never forgotten, whom he’d still go through hell and damnation for. His ex-wife, Coral.

Hi my name is Rebecca Lyman and reading is my passion. This blog will document my journey through reading over the years!